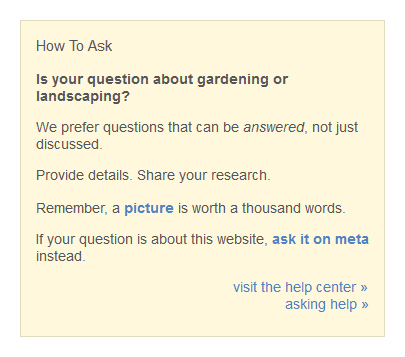 Welcome!
This site is for discussion about Gardening & Landscaping Stack Exchange. You must have an account there to participate.
Help
Visit chat

7
Having a separate question when OP is asking several follow on questions
10
How can we improve quality in the [identification] tag?
4
Getting location data from users
2
Can we have our own Formatting Sandbox, and make it easy to find?
6
For identification, please only post one plant per question, and be specific when asking!
4
Can/should we change the standard message posted when a late answer by a new user doesn't answer the question?
7
How can I reword this question so it follows guidelines?