Can we have our own Formatting Sandbox, and make it easy to find?

I think a formatting sandbox is very important, not just for new users, but because we all need a place to learn and experiment. I'd really like our site to have its own.

The sandbox to which users are currently directed is this meta post, which is used network-wide. I have two issues with that sandbox, the first being its size. It's so big that it takes a long time to load on Safari on my iPad, and has crashed the SE iOS app on more than one occasion. It currently has 333 answers, many of which are long and include innumerable comments.

Second, the code entries cause the question to display improperly on my iPad. (picture below) I can't widen it because somewhere that I can't even see a section of code is wider than the rest of the text.

A sandbox on our site would likely attract a more manageable number of users, most of which would not be posting code, alleviating both problems.

I'm not sure of the mechanics of creating our own, I'm just presenting the request and hoping for support. The network meta one is a community wiki post entitled Formatting Sandbox, so I imagine we would do something similar.

I'd also like it to be easier to find. I only knew it existed because someone told me about it in a chat room. In preparation for this question, I searched many of the Help Pages, including formatting instructions, to no avail. I finally entered "Sandbox" in the search box in the Help Center, only to find the link to it in tiny print almost at the bottom of the Help Center>Asking section entitled Why are questions no longer being accepted from my account?.

I know most of the Help Center pages can't be edited, but I think we may be able to customize that link. In the help center on Mathematics.SE, it links to their own meta sandbox.

That would be a great start, but we'd still need a way for people to know it exists, other than having to ask enough questions in a chat room until someone finally leads them to it!

Again, I'm just seeking support for the idea, with the logistics to be worked out if it's approved. 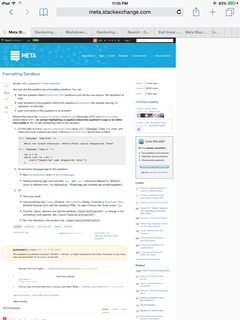 Yoda started one when he was a mod. Here's the link:

Feel free to use this as your own.

Welcome!
This site is for discussion about Gardening & Landscaping Stack Exchange. You must have an account there to participate.
Help

6
Is the [vegetables] tag useful? Or just another meta-tag?
17
Design ideas for gardening.stackexchange.com
11
Rising traffic and the road to graduation
4
Getting location data from users
5
How should the help center let our users know they should add location data where appropriate?
5
Should we blacklist the [garden] tag?
3
Can/should we change the standard message posted when a late answer by a new user doesn't answer the question?